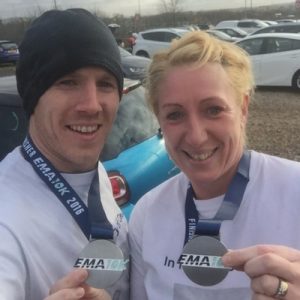 Two members of the MVIS team are raising money to support those affected by stillbirth and neonatal death.

Following the tragic stillbirth of his own son, Caleb George, earlier this year, MVIS’ warehouse & manufacturing supervisor Tom Hooton discussed with general manager Anne Ashman doing something to help raise money for Sands, which is helping Tom and his partner Ciara during this period.

The charity works in partnership with health professionals to care for bereaved families, also funding research.

The 100km in ten months project was devised, as the pair – along with friends and family – committed to each run a 10km event every month for 10 months. All the runs except the last will be in the Midlands, with a final event in London on the weekend of Caleb’s first birthday in July.

“Stillbirths happen more you think, and there is very little after-care for the bereaved.  We’re lucky to be receiving wonderful support from Sands, and want to help it to be able to give this to others too, and to undertake its vital research.”

The team completed their second run on Sunday, November 27th.

“We had a very early start to get to East Midlands Airport and it was freezing. However we both did well, Tom ran the 10k in 52.19 (he left me standing) and I ran it in my anticipated hour at 1.054.”

“Thank you to everyone for supporting us in these charity runs – we really do appreciate it. When you are running and getting near to the end of the 10k, you really do think about the people that have sponsored you and it keeps you going as you don’t want to let them down.”